It has been a tradition at Rosedale North for the Kindergarten classes to make graham cracker houses. I don't know how many years they've been doing it, but at least 9(Teresa did it too).
I helped piped 80+ graham cracker houses. They were glued to small milk cartons, so they wouldn't collapse. Then each child was asked to bring in 2 bags of candy(to share) or something to decorate the house with and a tub of pre-made frosting. They had a great time, you should have seen some of these houses, you wouldn't have known there was a house under all the candy and pretzels and marshmallows. Nathan took the longest to make his and was very particular about what and where things went. 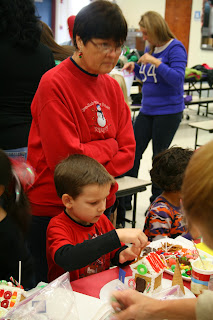 This all happened last Friday. This week was Santa Secret shop at school where the kids can bring money to buy gifts for friends and family. Yesterday Nathan's class did a gift exchange among the students and had some fun centers. Today was Jammie day and they watched Polar Express. Now he's out for 2 weeks - Yah!

Teresa had finals the last 3 days of this week. She spent all of last weekend working on a major project in English(it's a flip book, I'll see if video will post. She did a great job) and studying for finals. We're so proud of her. She got an A on all her finals except 1, in which she got a high B, still giving her an A in that class. We are so glad to be done for a couple weeks, it will go by so fast, but be nice!

We got our tree and decorated it this last weekend, along with building our Graham Cracker Village 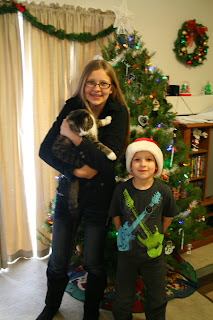 Saturday evening Jonathan and I went to his Company party. We won the center piece again.
Sunday Ty, Michelle and the boys came over to build graham cracker houses. 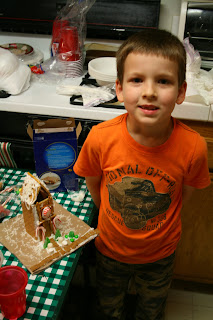 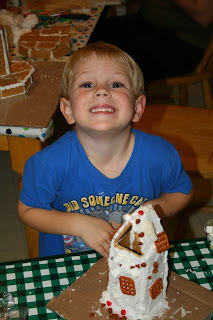 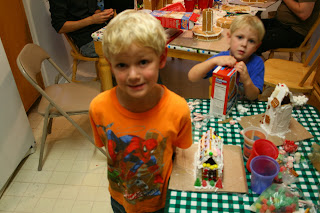 Teresa had her choir concert on Monday evening. They were wonderful, of course. It's been nice enjoying the festivities. I'm done shopping and almost done wrapping. It feels good and relaxing.
Posted by Jo at 8:04 PM No comments: