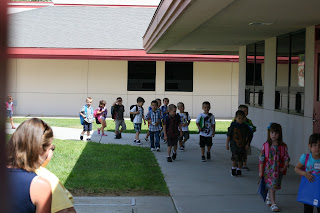 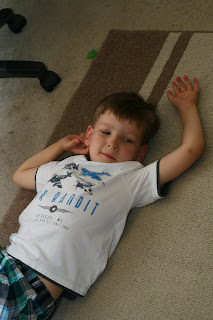 Nathan has been a little tired when he gets home, but it doesn't take long before he perks up and talks non-stop. The first day, I think it took him a few hours to tell me about school, bits and pieces of information were given at random intervals, it was pretty cute. Second day he was off and running, knew exactly where to go, he's a pro now. He was very excited to have had 5 birthdays in his class this week. Which makes sense, this class is for those kids who would have been held another year, so their birthdays will all be summer and fall. He told me they had to look and listen, and that was hard. He likes to talk, but he said he's trying hard to listen. They have some fun songs they're learning. I can't wait to get in the class to help, then I'll be able to make sense of half the stuff he talks about. He's really loving it!
Nathan also started soccer. I'm not sure which one he was more excited about, school or soccer. Monday he said, "I guess I'm really excited about school AND soccer" He has a lot of energy. They played some fun games to introduce them to soccer. He practices twice a week. They have their first game on Sept. 11th. Should be a fun season. Crazy busy too, which leads us to... 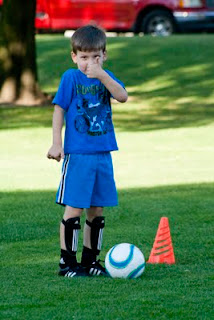 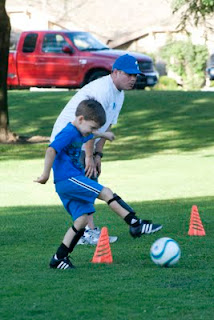 Teresa! She has been rehearsing for Les Mis the last 3 weeks, this week we got the schedule for her practices - Whew Busy! Basically every Sat for several hours and once or twice a week. Both Soccer and the play end at the end of October, then we'll take a breather and get ready for Christmas :)
Teresa is really loving school so far. She got some of the teachers she wanted. Her and Hannah don't have many classes together, but she says, who cares, it doesn't change anything, and she's right. Her Math teacher really seems to have it together, which is awesome! She's taking HS Algebra 1 this year, they have to pass with an 85% or higher to get the recommendation for Geometry next year. Something to reach for. Her Language arts teacher she got to know really well last year because he directed Suessical, so that's fun for her. She's really excited for this year. She loves the sound of the choir with the boys in it. Last year she was in the girls choir. A lot of fun stuff going on, it's eighth grade! I imagine this year will go by fast for her(and us), she was amazed at how fast 7th grade went by. 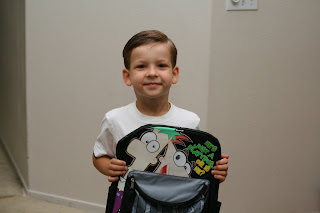 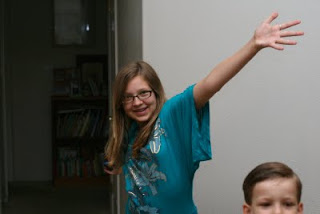 What do you think, is she excited? 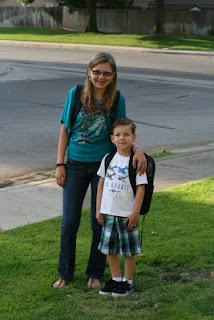 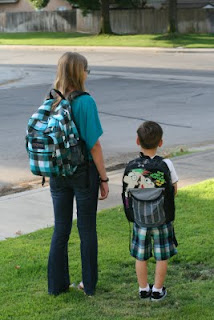 The kids were up and ready to go early this morning. Nathan wanted all these different pictures taken, with backpacks, without backpacks, it was kind of cute.
I just realized Teresa's backpack, and Nathan's shorts are almost identical.


We dropped Nathan off first, and stuck around for a bit, but it was clear Nathan was fine and more than ready to start this new adventure. Then I dropped Teresa off, it was so crazy, it took us 15 minutes to get into the student drop off zone. She's excited about eighth grade. I can't wait to hear how their first days went.

This being the weekend before school starts, I count summer as officially over. Am I sad? No, not really, we had a fun filled summer, sure it went by quick, but there's nothing wrong with that. The year will probably fly by too. That's okay, as long as we keep progressing.


Here are a few pictures of the end of our summer 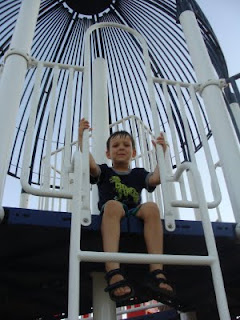 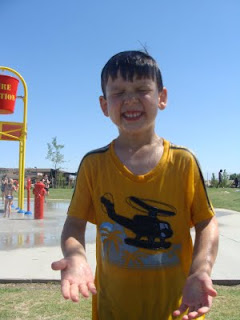 Spray park (the bucket in the background, dumps water, it's very cool) 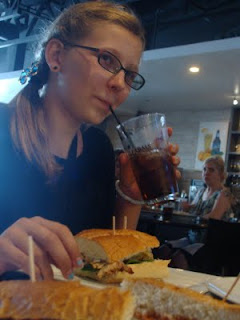 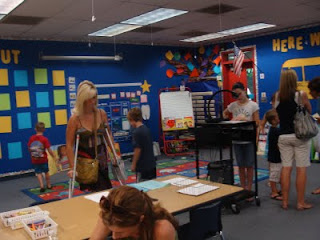 Nathan met his teacher yesterday, we are very excited. He is part of a 2 year kindergarten program that was started this year. There is only one class at the moment and in our district. So we lucked out. We were holding Nathan a year since he barely turned 5 in July. I've been around the schools enough to know it's to their advantage to be the older, rather than the younger. Then this came along and was perfect for Nathan. The program will be all over CA next year, what's happening is the entrance date is moving from Dec 2nd, to Sept 1st over the next 3 years. Moving one month a year, so next year the date will be Nov 1st. All I can say is, FINALLY! What's embarrassing is, CA is one of only 4 states who hadn't figured out the date was too late in the year, but now we've come to our senses and are fixing it. We are thrilled to be part of the pilot class. Nathan is so excited! 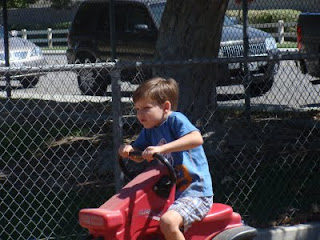 Playing on the Kindergarten playground 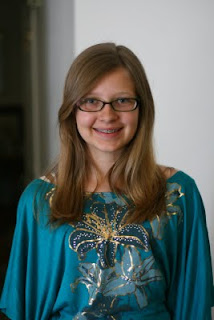 And of course, a new haircut. Nathan got one too, but it's just the same, I asked him if he wanted it different, and he said -"NEVER!"

Teresa didn't get to meet her teacher, but she found out she has Algebra first period with most of her friends, so that's fun. Teresa has also been rehearsing for Les Mis for the last 3 weeks, every night. Tonight they have a little rewards ceremony for Junior theater, she'll perform in that tonight with a group.


And that ends our summer, we are looking forward to a fun year ahead of us.

We went camping up the Kern Canyon last week, camped right by the river. It was our first camping adventure as a family. Both the kids have had to deal with motion sickness, Teresa out grew it years ago (we won't count the whale watching trip). We thought Nathan was good, but he didn't do so well on the way back, but that wasn't even bad, we go prepared (small sand bucket with a grocery back in it works wonders). Now that a week has passed, I think I can say we had a good time, and we just might do it again some day. Honestly, I don't see what people like about sleeping in a tent. I'm all for a wienie roast and the marshmallow roast(no, not s'mores - I don't like those), love the hiking and relaxing in the fresh, cool mountain air, the camp fire(minus the stench when you return home), star gazing at night... but the sleeping in a tent - BAH! Give me a cabin! 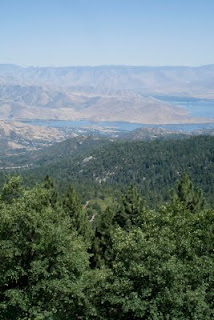 The view from Alta Sierra 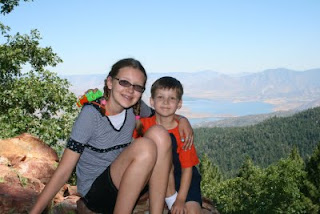 No, they aren't photo shopped in, I used flash 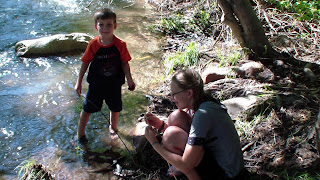 Playing by the river. Teresa made little "fishing" poles 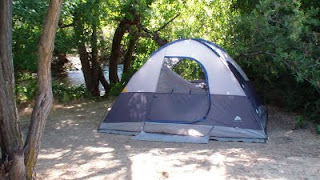 You can see the river behind the tent 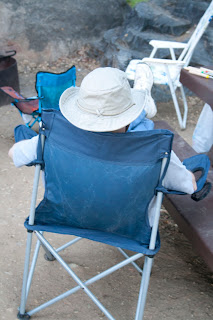 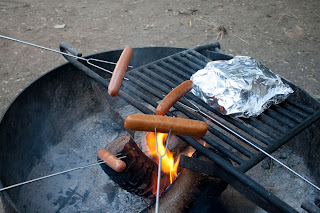 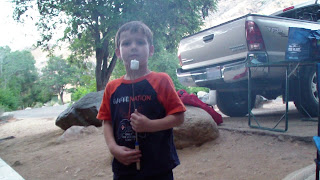 Nathan is quite the marshmallow roaster, he does it rotisserie style, resulting in perfection. 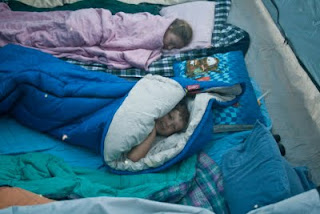