We made these cute little turkeys with the kids feet and hands, it was fun and they came out so cute. Plus, it will be fun to compare how they've grown come next year. 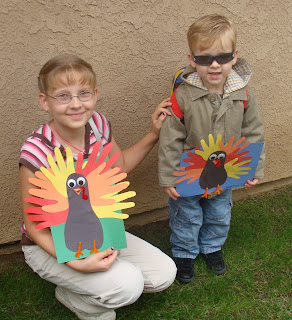 You can't really see it, but Teresa gave her turkey a tongue :)
Yes, those shades are a normal thing for Nathan, he takes them everywhere we go. Everyone thinks it's so funny.
(I think he's sensitive to the light, like his sister)
Posted by Jo at 3:44 PM No comments:

Teresa performed her piece in front of judges and parents and some of the school yesterday morning. She did a great job! We were so proud of her. She is a finalist and will go to District next week. There she just performs it in front of a small group in a classroom. She was the ONLY solo to stay in, the others dropped out. So she won by default, but that didn't bother her. The kids loved her piece and told her she was so brave to get up there by herself. Then her teacher told her, even though she was the only one, they didn't have to send her to district. It was fun to see her so excited. 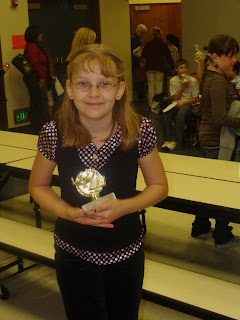 Here is my cake from my last cake class. It had to be 2 tiered, the rest was up to us. So I chose a fall theme. No, it's not dessert for Thanksgiving, we've already cut into it. It was my first time making chocolate fondant, and it turned out yummy(think Tootsie Rolls). 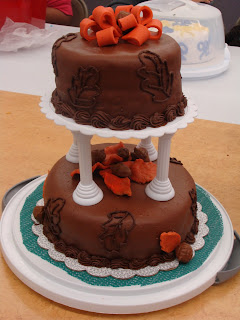 I hope everyone has a great Thanksgiving holiday. We're staying in town and making "grandma's rolls". I'm sure there will be friends and family and movies and games involved too.
Posted by Jo at 9:14 PM 1 comment:

This is Teresa's 5th grade school picture. So cute! 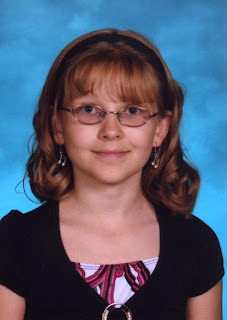 She's growing up quick. She is quite a character. You should hear the stories she has in her head. She wants to be an author/illustrator when she grows up. She must have 10 stories . And they're not wimpy stories either. The latest is a ghost story(one her her favorite genre's right now). We've written some of them down, but there's so many. She might get the chance to create some of them at school. Her teacher wants to get them doing creative writing.

She's a good little piano player, and has a nice voice. She was so excited yesterday because she was switched to the high part in choir because they needed more sound. I love that she is confident enough to do these things. Her Oral Language piece is coming along great too. She'll perform that next Tues(25th). I'm so proud of her for doing it. It's fun watching her experience all these new things and watching her grow, the good and the bad. I know, we dread the bad stuff, but she's so amazing how she handles things. She seems to have a mature outlook on things. Don't get me wrong, she can be as cooky and crazy as the next guy. She's fun to be with and we love to just talk and talk about everything from fun to serious. It's great!

I know, I'm gushing over her, I was just going to post her cute school pic, but I got carried away :)
Posted by Jo at 9:42 AM No comments: 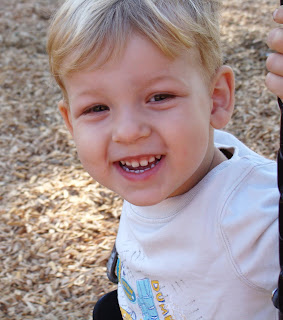 Don't you just love that smile!


I love this kid, and for so many reasons, but I'm just going to share a few recent moments that made me laugh. I was just emptying the dishwasher and Nathan comes running in, and starts handing me each dish, as if it were just the thing to do (he does help with dishes quite often). So then when the last dish was gone he closed the door and ran back to continue what he was doing before. Very matter of fact!

A few weekends ago we were having french toast with powdered sugar(yum!). First, I have to tell you he refuses to call it sugar, it's all salt. So naturally powdered sugar is Ho-Ho salt to him (it does look like snow). Yes Ho-Ho, like what Santa says. Anything that has to do with Christmas is Ho-Ho, or Ho-Ho guy - even Christmas lights. I'm not sure how he knows all that is Christmas, but he does.

That's something else I love, he doesn't call things by their name, like dog, or bear, or dinosaur. He used the sound he thinks they make. For example a Dino is a Roar, along with anything else that might growl or be scary, Santa is a Ho-Ho, Dogs are good, he calls them Ha-Ha's. He never did bark for a dog sound, he panted for a dog, which sounds like ha-ha to him. Monkey's are Ah -Ah's (oo-00-ah-ah). It's great! He has words for kitty and cow and sheep, so he understands the idea. But he likes it his way(me too)

He was a little obsessed with cows for awhile, I'd ask him what song he'd want to sing and he'd say cow. Hum, I was having to make up songs with cows, like , The cow went over the mountain, and Where oh where is my cow. So now, he's obsessed with Ho-Ho guys. I've had to pull out the Christmas stuffed toys to appease him and we're singing Christmas songs at nap and bedtime. Of course, when he asks I can't think of very many Christmas songs, especially ones that talk about santa. 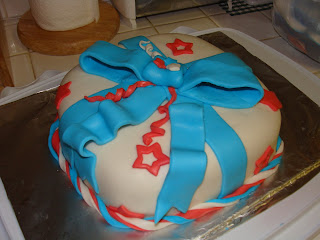 Here is a cake I did for a Baby Shower 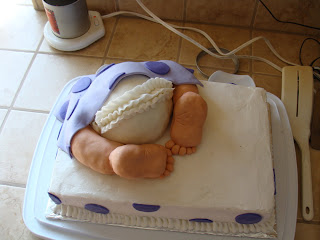 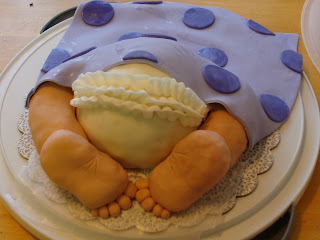 The baby is rice crispy treats and fondant
Posted by Jo at 3:24 PM 1 comment: 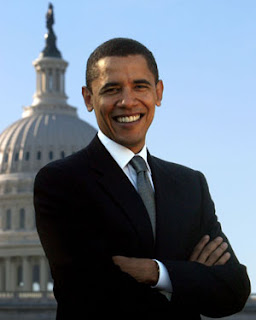 I suppose most who read my blog might not be as excited about Obama winning the election, and that's okay. We are excited enough for you. I finally have a sense of hope for my children and this beautiful country we live in. And that alone, without action, is a very poweful thing. Without hope we are nothing.
He gave an awesome victory speech, if you didn't stay up to hear it here's a link http://www.youtube.com/watch?v=t_cQZidZq4c

I am dissapointed that prop 8 passed, but it is reassuring to see that it was close(52% to 48%). Some day people will understand and accept everyone as equals, with absolutely, equal rights, none of this crap we're seeing now. Can't we see history repeating itself here? Slaves, womens rights, it's all the same in my book. These are human beings who deserve to have the same thing as everyone else. I'm sorry if that scares people, but, I would imagine, way back, the thought of slaves doing anything other than labor was scary and the idea of a woman voting and owning land was scary. And here we are today, no slaves and poweful woman all over the world. Not so scary anymore. I hope we'll look back on this and regret that 8 passed, maybe feel bad, that it took so long for gays to get this right to marry and have it recognized.
Posted by Jo at 2:20 PM 1 comment:

What a great day! Jonathan took 1/2 day off which is always nice. After I picked up Teresa we went to my dad's work. They REALLY get into it, it's fun. Teresa's friend Brandie tagged along with us. We went to school for a Trunk-or-Treat and then hooked up with Ty, Michelle, Ian, Sean and Serina and hit a little of the neighborhood. Jonathan took the girls out for a little more, just the 3 of them. Most of us were done walking around.

So here are a few pictures from our fabulous halloween. 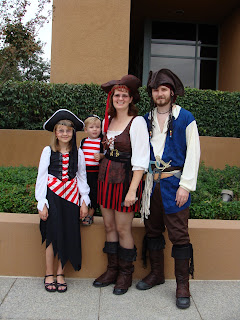 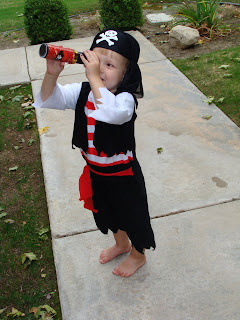 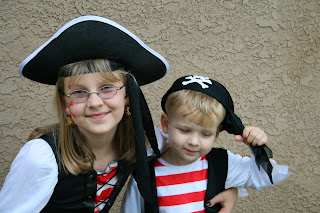 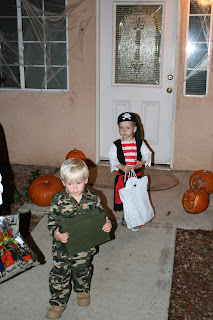 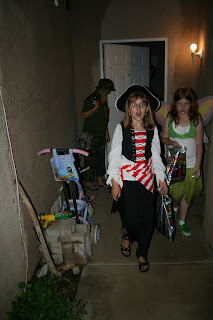 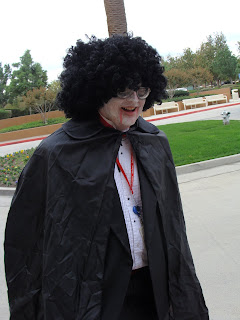 This is my dad 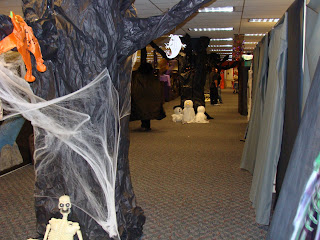 And this is just a small part of his office. Each floor chooses a them. His was
Carn-evil. It was well done
Posted by Jo at 10:58 AM 3 comments: